I'd call the first week a great success!

Lianthus started this April because I drew a scene with a skeleton in the forest in Aseprite. Around this same time, I was getting extremely burnt out with my college work, and the other game I was working on, so I took a weekend to learn the sprite-stacking technique used in games like NIUM and CHUMBO.ZONE. After that weekend, I had this :

I was pretty much ready to be done with this now, as a nice little tech demo. Or that's what I kept telling myself to do. But I kept coming back to this intriguing idea, and i'm very glad I did. Over the summer, I turned this tech demo into a full game, which has been the most successful project i've ever done.

While making this game my social media really took off, much more than with anything else I had ever made before. The average tweet of my previous game got around 30 likes, but every tweet of this game got at-least 50, and the average was about 200. I can't really be sure how much my twitter following impacted the success of the game so far, but I do think it was significant in getting featured by itch.io. (Also, the lion's share of people that paid for the game came from my twitter and discord server).

I stuck to a very specific strategy when posting about this game on twitter, that was much different than how I posted before. I had the idea of aiming my tweets at the people I want to play the game, rather than people that want to follow my progress on the game (aka other gamedevs). This is a pretty obvious statement, but I had fallen into the trap of targeting everything I did only at other gamedevs, who are a subset of the larger group I want to play my game. 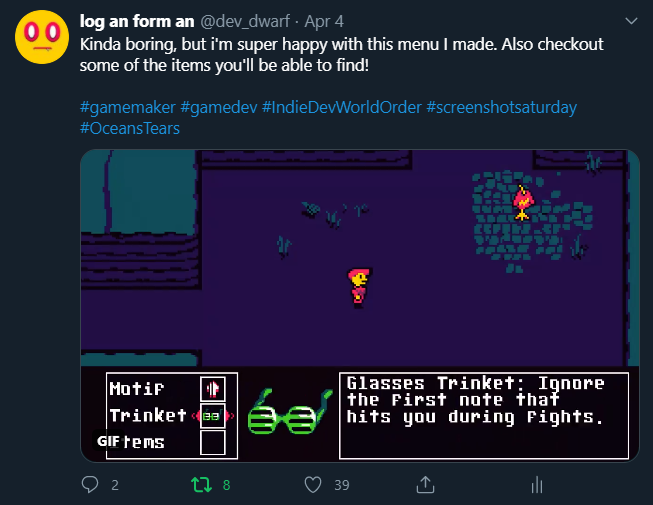 For example, based off the wording of the above tweet, and the excessive amount of hashtags, i'd say it is more targeted at other gamedevs. Conversely, the below tweet is more cryptic and mysterious, making people wonder about the game instead.

Quarantine was a depressing time.

When I was turning the prototype from above into a fuller game, I stayed up till 4 every morning, playing the same couple songs on repeat. I was trying to capture the sense of wonder I had felt when exploring the forest as a kid, but doing this by isolating myself inside was not working out too well. Towards the end of the summer, I started going on runs and walks again, sleeping properly, and working out more. It really helped my mindset. I don't think I would've been able to finish this game if I had kept the depressing attitude I had at the start of summer.

Anyway, thanks so much to everyone who's downloaded the game, and especially those that chose to pay for it! Hearing about and watching people experience the game has been so fulfilling. Here's to many more weeks of Lianthus!

I don't know what I'm doing for my next game yet (or I know completely and can't say anything yet) but I hope many of you will stick around and support me for that as well.

(Also, if you bought the game, join my discord server and i'll give you a special role that will let you have early access to my games in the future https://discord.gg/5URwf82)

Reforge the seal, lock the darkness away.